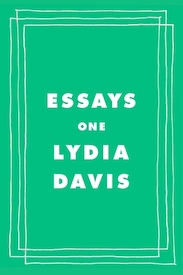 Volume one of Lydia Davis’s essays is brimming with thoughts on writers and visual artists (Joan Mitchell, John Ashberry’s translation of Rimbaud’s Illuminations [which I read], Joseph Cornell, Hölderlin, Flaubert, Barthes, Stendhal, Jane Bowles), dissections of plots and writing and style, and writing advice. My favorite piece was the Thirty Recommendations for Good Writing Habits, a clickbait headline befitting the 2013 essay. The first 10 recommendations she recaps here, with major emphasis on taking notes, noting your own activity and feelings along with others’ behavior. I like the push to work from your own interest, which is what I do, pursuing odd investigations into the most random of topics. I definitely agree with being mostly self-taught, reading a lot. She recommends keeping books of writing exercises on hand to do something even when you’re not inspired. Take time in between stopping writing and picking up your next task to let your brain continue to feed you ideas. #17 says to learn as much as you can about the origin of words you’re using, #18 listen to the sound of the words, and #19 read poetry regularly. #20 be curious about as much as possible and #21 let your mind wonder about things without looking them up immediately.

Lydia Davis is usually a palate cleanser for me, her spare sentences telling a complete story in the least amount of space imaginable. But I found this 2014 collection to be disappointing, jammed full of dreams and re-enactments of what Flaubert would say. Perhaps she says it best in the piece Not Interested: “I’m simply not interested in reading this book…. That’s how I’m feeling these days, anyway, maybe it will pass.” A tiny bit from the piece I enjoyed most, I’m Pretty Comfortable, But I Could Be a Little More Comfortable:

The people in front of us are taking a long time choosing their ice cream.

A man is coughing during the concert.

I can’t believe I hadn’t read any Lydia Davis before this book. Utterly graceful and mesmerizing writing, she weaves a tale of love, breakup, and loss while more importantly showing us how to put together the bones of a novel. Davis begins with two sections: that the last time the narrator sees “him” he’s moving things out of her garage, and a year later while traveling (to San Francisco? the bookstore seems mightily like City Lights), she walks to find his address but he’s moved on so she walks some more and asks for water at the bookstore and when refused, sits on a chair exhausted. Eventually the bookseller brings her a cup of tea. This cup of tea is what she ultimately ends with, needing a type of ceremony to end the story instead of all the ends that had cropped up along the way within the story.

Ever since I finished this, I think of her whenever I walk through the parks in the city which teem with eucalyptus trees, her words about their smell ping ponging around in my head although I don’t remember the exact ones she used.

Throughout, she’s dropping clues about tiny inconsistencies in the story. Page 61 references “later in the novel I mention a dinner in a Japanese restaurant during which I left the table and tried to call him from a phone booth by the restrooms.” When that scene arrives on page 177, it’s a Chinese restaurant. This challenges us to wonder what is real, what is imagined, what is not even comprehended to be imagined because we are so confident that it is real. Davis exposes how she originally wrote the book in third person but was struggling to get the names right for the characters, “Laura” seeming too peaceful, “Sarah” seeming too staid. She constantly works on how best to lay out the story- chronologically vs. scattered. Entire swaths of the book are dedicated to describing the writing process:

At times I have the feeling someone else is working on this with me. I read a passage I haven’t looked at in weeks and I don’t recognize much of it, or only dimly, and I say to myself, Well that’s not bad, it’s a reasonable solution to that problem. But I can’t quite believe I was the one who found the solution. I don’t remember finding it, and I am relieved, as though I expected the problem to still be there.

In the same way, I will decide to include a certain thought in a certain place in the novel and then discover that several months before, I made a note to include the same thought in the same place and then did not do it. I have the curious feeling that my decision of several months ago was made by someone else. Now there has been a consensus and I am suddenly more confident: if she had the same plan, it must be a good one.

But at other times I discover that this person working with me has been hasty or careless, and now my work is even more difficult, because I have to try to forget what she wrote. Not only do I have to erase it or cross it out but also forget the sound of it or I will write it again, as though from dictation. I should know better, because when I translate, I have to make the English as good as I can when I first write it own or the bad sound of a bad version will stay with me and make it harder for me to write a good version.

The narrator earns advances for translation work that she spends immediately, going through a frequent boom and bust cycle. She belittles herself a bit for her work, “I’m not tired of translating, though I probably should be. Maybe I should also be embarrassed that I’m still translating after all these years.” Not sure if this is still the case, but she says translators are paid by the word, so the more careful they are, the less they’re paid; for one difficult book she translated, her earnings netted to $1/hr. No one at parties likes to talk to translators, although when she finds another one, she’s excited: “At first I talk to the woman with enthusiasm, because there is so much I have wanted to say about translating to a person who understands the work, things I have thought about a great deal and have kept to myself because I don’t often meet another translator. Then my enthusiasm slowly dies, because everything she says to me in reply is a complain, and I see that she has no joy in translating–no interest in her own work and no interest in me or my work either.”